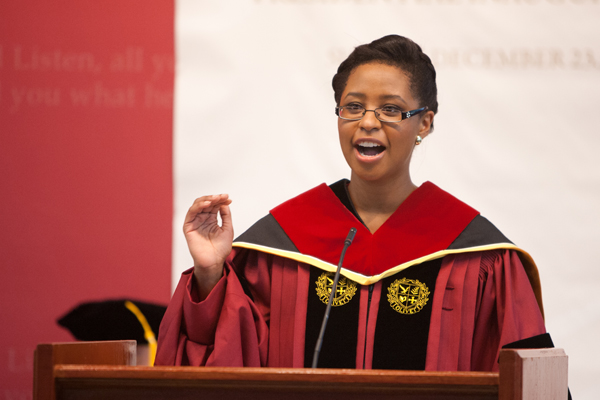 Dr. Davis becomes the fourth President of the University after former president, Dr. William Wagner, completed his term.  Dr. Wagner will continue to serve in the school's doctoral program. The students, faculty members, families, and school officials, who celebrated a new period in Olivet's history, attended the ceremony.

The program opened with a processional of distinguished faculty of Olivet, followed by an opening song from the Jubilee College of Music. Dr. Donald Tinder, the Dean of Olivet Theological College & Seminary, called for God’s blessing on the ceremony in an invocation prayer. The ceremony was further flourished by a celebratory music performance by the school’s choir singing The Holy City by Stephen Adams (Michael Maybrick).

After Dr. Joseph Ray Tallman gave an introduction, the former President Dr. Wagner gave his greetings and remarks. Dr. Wagner expressed his pleasure in seeing the next generation of people taking leadership positions.

Following his remarks, Olivet prepared a special video tribute for Dr. Wagner's legacy and key moments at the school. After remembering and thanking Dr. Wagner for his contributions, Dr. Andrew Lin, the Chairman of the Board of Trustees, asked Dr. Davis to come up on the stage and administered an oath. Dr. Davis pledged to devote herself for both the school and God's glory. A plaque was delivered to Dr. Davis, confirming her new presidency at the school.

Dr. Davis, who worked at Olivet University for more than seven years, gave her inauguration address as she begins her new role as the President. The audience welcomed the new President with a standing ovation.

Reflecting upon the fact that many universities first started as Bible Colleges but later turned secular. Dr. Davis said Olivet would be different.

"Olivet, however, by God grace and power, is determined to have a different spirit – a spirit that endures in following after the heart of God," said Dr. Davis.

In addition, Dr. Davis reminded the audience that the world is in desperate need of the Gospel, citing the recent tragic incident that took place in Connecticut where a gunman massacred nearly 30 people.

"The world desperately needs the Gospel. I am committed to doing my best – following in the footsteps of Olivet’s great leadership, and together with the people across Olivet and the Biblical higher education community – to see that need is met a moment sooner," Dr. Davis said.

"As we greet a new time in Olivet's history, may the Lord be pleased to confirm in us an unchanging heart that always follows after the Lord. And in doing so, I wish we could all be used, together with all the faithful in Jesus Christ, to meet the world’s greatest needs in the establishment of the Kingdom of God, and allow the evidence of our progress to shine more clearly and brightly each day," Dr. Davis concluded.

After finishing her inaugural address, the attendants sang the closing song together. Dr. David Jang, the founder and the International President of the school, blessed the ceremony in a benediction prayer.

Dr. Davis graduated from Harvard University and received her M.Div. and D.Min. from Olivet University. Since 2005, she has served Olivet's administration and helped to successfully lead the institution through the process of initial accreditation, as well as several expansions of that accreditation's scope. Prior to her appointment as president, Dr. Davis served as academic dean of Olivet University. The Board of Trustees has made the decision early this month and her appointment became effective on Dec. 23, following the inauguration ceremony.